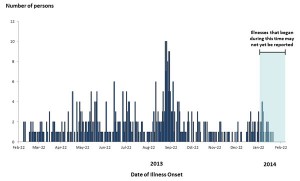 According to the CDC today the investigation continues into Salmonella Heidelberg infections likely related to Foster Farms chicken.

The number of reported infections from all seven outbreak strains of Salmonella Heidelberg returned to baseline levels in January and the outbreak appeared to be over, as noted in the previous update on January 16, 2014. However, the investigation continued. Ongoing surveillance identified in February that infections from two of the previously rare outbreak strains have again exceeded the number of infections expected to be reported to PulseNet during this time of year.

The outbreak strains of Salmonella Heidelberg are resistant to several commonly prescribed antibiotics. Although these antibiotics are not typically used to treat Salmonella bloodstream infections or other severe Salmonella infections, antibiotic resistance can increase the risk of hospitalization in infected individuals.

(a) No person shall—

A food shall be deemed to be adulterated—

(3) if it consists in whole or in part of any filthy, putrid, or decomposed substance, or if it is otherwise unfit for food; or

Fact, despite the hundreds are sickened, the USDA’s FSIS still does not consider Salmonella an adulterant per the definition above.  That is why Foster Farms can knowingly sell chicken tainted with Salmonella and FSIS does nothing about it.

It is clear that USDA’s FSIS has the ability to declare Salmonella an adulterant.  It did it to E. coli O157:H7 in 1994 and to other shiga-toxin E. coli in 2011.  However, absent leadership at USDA’s FSIS to do it, perhaps we need to consider U.S. Sen. Kirsten Gillibrand’s “Safe Meat and Poultry Act” that she introduced last Fall.  Gillibrand’s bill seeks to:

Or, USDA’s FSIS could respond to the regulatory petition filed in 2011 by the Center for Science in the Public Interest.  However, that petition would only apply to ground meat and poultry found to contain antibiotic-resistant strains of Salmonella.

Or, we can continue to do nothing.